New Visions Worldwide Distribution also syndicates on the barter syndication model to radio stations market-by-market and group-by-group nationally in the U.S. Monthly reports similar to our TV syndication reports are sent to our clients.

New Visions Worldwide Distribution receives programming developed and produced by sister company, Echo Radio Productions, Inc. Echo Radio Productions develops 60 or 90-second radio features. These features are researched and written about entertaining subjects of interest to the general national audience. A bartered 30 second commercial is integrated into the mid break and airs at no air time cost benefiting the sponsor.

The advantage to radio stations nationally is that they receive a highly interesting short format program where the delivery of a quarterly CD and printed manual allows programming for each of the 5-weekly business days in both or either morning/evening drive time. The advantage to sponsors is the added attention received from an informative and entertaining feature and the sponsor's commercial airing at no commercial air time cost. The result is that New Visions Worldwide Distribution is able to guarantee a minimum of a 200% return on investment (ROI) via the measured media of the sponsor's bartered commercials. 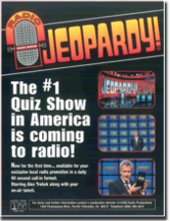 Radio Jeopardy: The first ever radio extension of the most successful TV game show. Radio Jeopardy aired in approximately 170 U.S. and 28 Canadian markets for a two-year period. The client was the movie rental division of Sony Pictures.

Use the player below to listen to an excerpt from the programs. 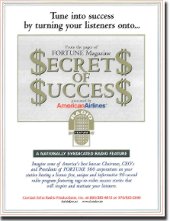 Use the player below to listen to an excerpt from the programs. 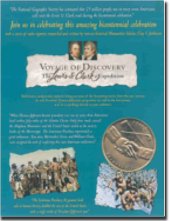 Use the player below to listen to the 5 excerpts from the programs.